At the BPS meeting in May 2019, Dr. Daniela Mockler, who recently did her doctorate at KSETA, was awarded the "Prize for best speaker". Congratulations!

The young scientist contest has a long tradition at the annual BPS meeting. Both doctoral students and young postdocs with less than 5 years of professional experience after their PhD defense are eligible to take part in the competition. From among the applicants, the committee initially invited eight speakers to a pre-selection and chose three of them as finalists, who presented their papers at the BPS meeting on May 22. The three finalists will also have the opportunity to write an article on their topic for the B-Phy Magazine of the Belgian Physical Society.

PhD students with the first antenna for the AugerPrime radio upgrade.

The radio upgrade, which is part of the AugerPrime upgrade, is a very important part of the future research of the Pierre Auger Observatory by adding array-based composition sensitivity for large zenith angles, for which the scintillator upgrade is not effective. Having good composition-sensitive information up to very large zenith angles is crucial for composition-improved anisotropy studies and adds to the overall aperture of the observatory.

Meghana Mahaveer Patil is a KSETA PhD student at IBPT. Within a video about the IBPT for the Spring Meeting of the American Physical Society, she reports in a short spot (starting at 4:27) about her work in accelerator technology. 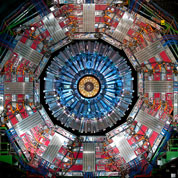 For her presentation at the conference "11th International Workshop on Top Quark Physics 2018", Denise Müller, PhD student at the Institute of Experimental Particle Physics (ETP), was awarded the prize for the best young scientist presentation in front of 130 participants.

The 11th edition of the conference "International Workshop on Top Quark Physics" took place in Bad Neuenahr from 16 to 21 September. This annual conference brings together experts from theory and experiment who deal with the heaviest of the six quarks, the top quark. Traditionally, the Young Scientist Forum gives young scientists the opportunity to show their work in short presentations. Denise Müller reported on the measurement of the single top quark production in the t channel with data from the CMS experiment, where she does research together with other colleagues from ETP under the supervision of Dr. Thorsten Chwalek.

While top quarks are generated in pairs with top antiquarks in strong interaction, the generation of single top quarks takes place in weak interaction, the secrets of which have not yet been revealed in detail. In Denise Müller's analysis it was possible to measure the relationship between the production probabilities of individual top quarks and individual top antiquarks with unprecedented precision and thus to make statements about the inner structure of the proton.

The KIT is involved in the CMS experiment with a ninety-member working group headed by Prof. Thomas Müller. In 2012, the long-sought Higgs particle was also discovered there.

Between May and July 2018 five  Master students from IIT Bombay in Mumbai and another Master student from Sardar Vallabhbhai National Institute Of Technology in Surat visited KSETA with a KHYS Internship Grant.

The interns participated in projects related to the current and future experiments Belle in Tsukuba (Japan), milliQan at CERN in Geneva (Switzerland), and IceCube Gen2 and IceTop at the South Pole, as well as the development of CMOS sensor technology.

The Helmholtz Association supports three international research schools, among them the International Research School on Astroparticle Physics and Enabling Technologies, applied by Karlsruhe Institute of Technology (KIT) together with Universidad Nacional de San Martín (UNSAM), Buenos Aires. The spokespersons of the Research School, that is expected to start on April 1, 2018, are Dr. Ralph Engel from the German side and Dr. Alberto Etchegoyen from the Argentinian side.

Prof. Robert Klanner, University of Hamburg and DESY, was chosen to receive the Julius Wess Award 2016.

Each year nationwide only six PhD graduates receive a Helmholtz-Doktorandenpreis, one in each research area. The Helmholtz-Doktorandenpreis in the research area "Matter" went to KSETA twice in a row, after Benjamin Schmidt winning the 2015 Award.
Wolfgang Hollik had completed his PhD at the Institute for Theoretical Particle Physics in the group of Prof. Ulrich Nierste and is now a postdoc at the Helmholtz Centre DESY in Hamburg.
More information

Florian Heizmann and Hendrik Seitz-Moskaliuk at the presentation of the award
Florian Heizmann and Hendrik Seitz Moskaliuk, both PhD students at KSETA and members of the Helmholtz-University Young Investigator Group of Dr. Kathrin Valerius, got in London at the NEUTRINO 2016 conference a prize for their collaborative poster. From a total of over 400 entries only six posters were awarded.


The awards were presented by Dr. Leonie Mück, senior editor at Nature. They consist of a cash prize and an annual subscription of Nature.

Five PhD students were granted the Doktorandenpreis of the Helmholtz Association for their outstanding scientific achievement, including Benjamin Schmidt, former PhD student at KSETA - congratulations!

The KSETA Board of Researchers elected new representatives at its meeting on March 5.

The Board of Researchers thanks Prof. Johannes Blümer for his constant and dedicated commitment as spokesperson of KSETA.

Due to new legal regulations since January 1, 2015 a PhD agreement has to be signed acc. to §38, paragraph 5 Landeshochschulgesetz (LHG) immediately after receiving the confirmation of supervision.

In addition, the online registration of all doctoral researchers at KHYS is mandatory: http://www.khys.kit.edu/handbuch.php.


"We have tested the model we're using to describe the world with uncanny precision."

What holds the world together at its core

On November 13, 2014 KSETA-PI Prof. Margarete Mühlleitner from the Institute of Theoretical Physics (ITP) was a guest of ZDF Morgenmagazin. On the occasion of CERN's 25th birthday, she explained aspects of particle research to the general public in a short contribution.

The latest results of the measurement of high-energy particles with the detector AMS on the International Space Station ISS deepen our understanding of the origin and nature of cosmic radiation.

A junior research group of the Karlsruhe Institute of Technology (KIT) under the leadership of Dr. Iris Gebauer is significantly involved in the experiment: It played a leading role in measuring the total flow of electrons and positrons.

The spokesperson of the AMS project, Professor Samuel C. C. Ting, presented the results at the CERN Research Centre.

Researchers from the Institute of Experimental Particle Physics (ETP) at KIT, led by Professor Wim de Boer, were involved in the development and construction of several components of the AMS detector. In 2011, the KIT set up the Young Investigator Group (YIG) "Cosmic Ray Transport Models for Dark Matter Searches with AMS-02" under the direction of Dr. Iris Gebauer to analyze the data. The YIG has taken the lead in measuring the total flow of electrons - negatively charged elementary particles - and positrons - antiparticles of electrons with opposite charges.

Since the discovery of a Higgs boson by the CMS and ATLAS Collaborations in 2012, physicists at the LHC have been making intense efforts to measure this new particle’s properties. The Standard Model Higgs boson is the particle associated with an all-pervading field that is believed to impart mass to fundamental particles via the Brout-Englert-Higgs mechanism. Awaited for decades, the 2012 observation was a historical milestone for the LHC and led to the award of the 2013 Nobel Prize in Physics to Peter Higgs and François Englert. An open question arising from the discovery is whether the new particle is the one of the Standard Model -- or a different one, perhaps just one of many types of Higgs bosons waiting to be found. Since the particle’s discovery, physicists at the LHC have been making intense efforts to answer this question.

This week, at the 37th International Conference on High Energy Physics , a bi-annual major stage for particle physics, which in 2014 is held in Valencia, Spain, the CMS Collaboration is presenting a broad set of results from new studies of the Higgs boson. The new results are based on the full Run 1 data from pp collisions at centre-of-mass energies of 7 and 8 TeV. The analysis includes the final calibration and alignment constants and contains about 25 fb-1 of data.

What are air showers and what do they tell us about our cosmos? Answers for students and teachers as well as for scientists are provided by the new internet platform KASCADE Cosmic Ray Data Centre (KCDC). In the research project KASCADE, KIT scientists have been collecting data from space for 20 years, which now are freely available for the public.

last change: 2019-05-27 KIT – The Research University in the Helmholtz Association