Presentation of the Julius Wess Award 2013

The Julius Wess Award 2013 was dedicated to Takaaki Kajita (ICRR Tokyo) for his outstanding contributions to neutrino physics and especially for his discovery of the neutrino oscillations at the Super-Kamiokande Detector.

As part of the monthly events of the Astronomische Vereinigung Karlsruhe, Prof. Wim de Boer, KIT, gave a lecture at the Museum of Natural History on Monday, December 9, 8:00 p.m. on

"AMS-02, a space experiment on the International Space Station in search of dark matter"

The Alpha Magnetic Spectrometer AMS-02 was flown with the space shuttle Endeavour from the space station Cape Canaveral (Florida) to the International Space Station ISS on May 16, 2011. Since then, it has been investigating the composition of cosmic radiation with unprecedented precision. In the foreground is the search for antimatter, as it is expected within the framework of cosmological models as a relict from the Big Bang. AMS-02 is also intended to answer questions about the nature of dark matter. Scientists from Aachen and Karlsruhe are in charge of the experiment in Germany. First results which were published in summer 2013 were presented.

Congratulations to KSETA Fellow Carolin Heidt, who was dedicated the "DKV-Studienpreis" for her diploma theses at ITEP (KIT) by "Deutscher Kälte- und Klimatechnischer Verein (DKV)".

Partners in this joint seminar are the University of Heidelberg, University Tübingen and KIT

The seminar always takes place at 4 pm in the "Großer Seminarraum" building 601, room 427 at KIT Campus North. Coffee will be served at 3:30 pm in the vestibule to the seminar room. Lecture language is English.

The programm for the SS 2013 is available here.

Prof. Stefan Pokorski from the University of Warsaw gave a lecture series on "Electroweak symmetry breaking in the SM and beyond"

Documentation of this Highlight Lecture here 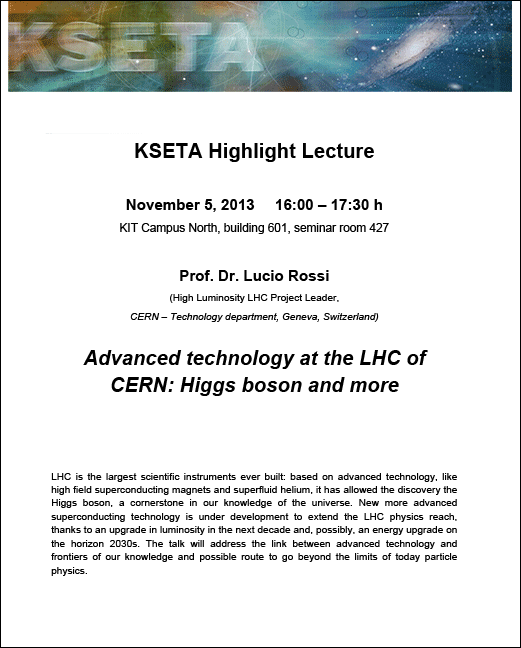 This first seminar will focus on technological aspects of the research related to KSETA – in the broadest sense this includes all tools and techniques that we make use of in the scope of our research.

All KSETA-Fellows are cordially invited to join the “KSETA Workshop” for doctoral researchers, which will take place from October 16th to October 18th 2013. The venue will be the conference hotel “Waldhotel Zollernblick” in Freudenstadt. The focus of the workshop will be technologies in all aspects from vacuum technology and cryogenics to data aqusition tools and computer algebra systems. Tools and methods used by you will be presented and discussed in small groups. more...

A detailed program will be provided on the workshop page. 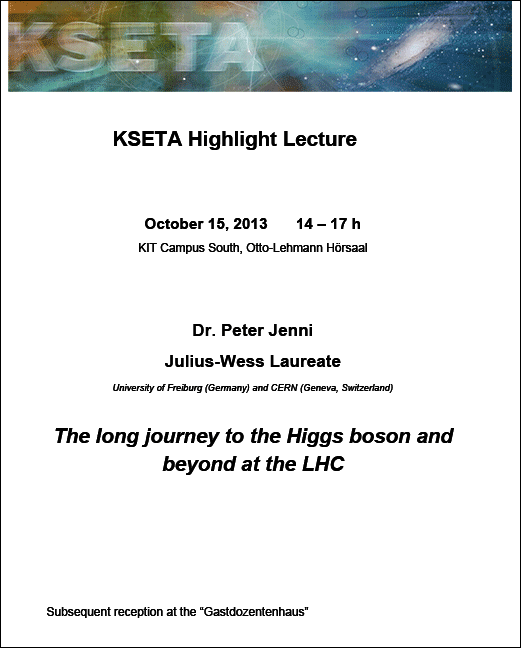 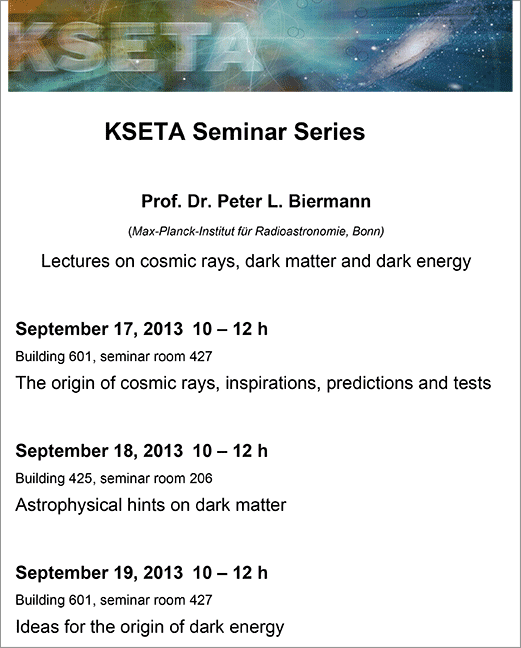 The top quark – the heaviest elementary particle known today – was the main focus of the TOP 2013 conference held in Durbach, Germany, on September 14-19, 2013. Participants from all over the world reported on the latest theoretical and experimental results on the physics of the top quark and discussed perspectives for the research field. Young physicists had the opportunity to meet world experts on top-quark physics in an informal atmosphere during a question&answer session. The conference program was complemented by a poster session in picturesque Staufenberg castle and by an excursion to the city of Strasbourg, France.

The TOP 2013 conference was co-organized by KIT, DESY, and the University of Hamburg and supported among others by the German Research Foundation and the KIT Center Elementary Particle and Astroparticle Physics (KCETA).


KSETA organized a visit to CERN on Monday August 19, 2013. All KSETA-Fellows were invited to participate in this unique event during the shut down phase of the LHC in 2013/2014. Outside the shut down phase it is not possible to visit the underground area of the Large Hadron Collider. 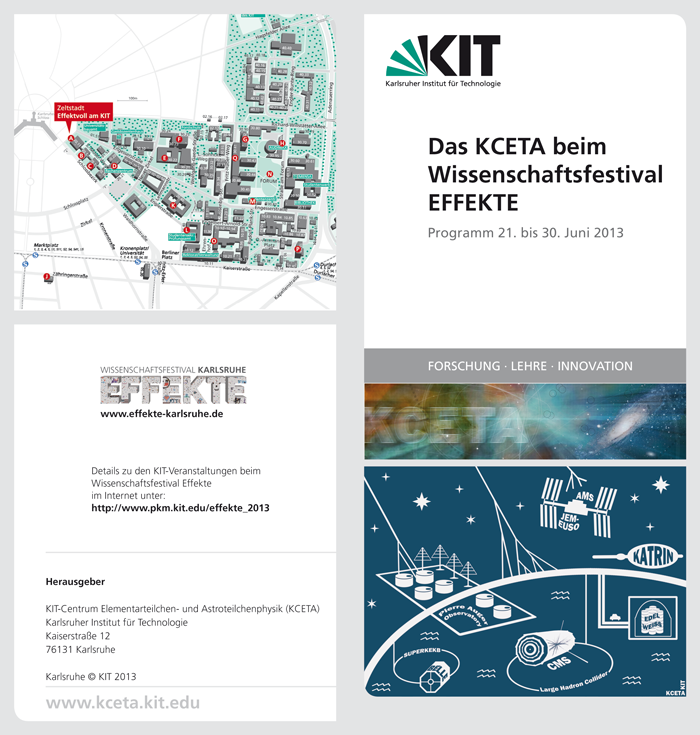 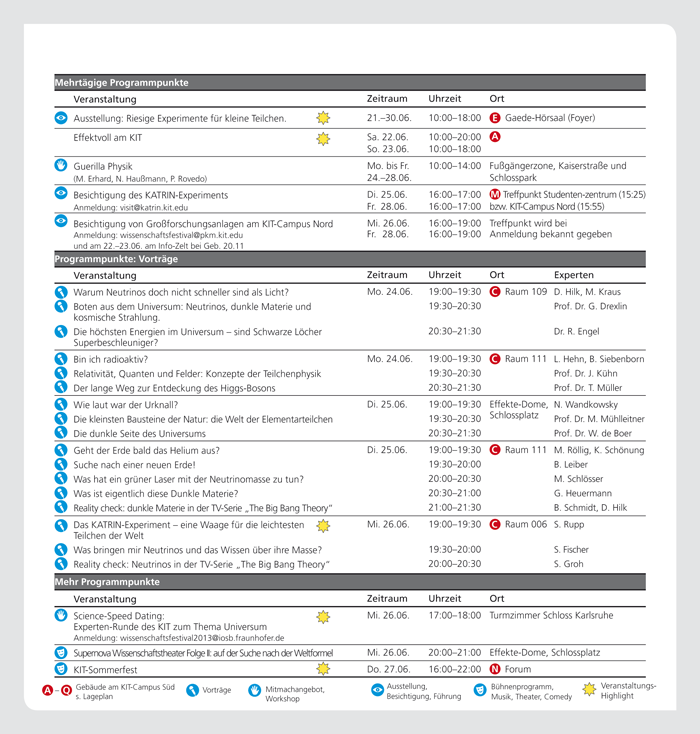 ) by its rector Carlos Ruta in a ceremony that took place in Buenos Aires, Argentina.

German and Argentinean scientists, academic authorities, professors and students were gathered to welcome Johannes Blümer, who was awarded the highest honorary title of UNSAM "for outstanding support and dedication to the development of astroparticle physics in the country, where he participated in major joint projects, and the training of international young researchers ".

, gave the traditional praise of honor. He mentioned the brilliant career of Prof. Dr. Blümer, his tremendous effort to develop astroparticle physics worldwide, and particularly in Argentina, and his devotion to teaching. He also highlighted his work as spokesperson of the Helmholtz Alliance for Astroparticle Physics (HAP

). Since May 2013 a dual degree PhD program has been set up between both universities.

The event ended with a conference from J. Blümer “Big Science on a Small Planet", in which he explained how diverse is this area of study, which includes cosmic rays, neutrinos, dark matter, and described the work performed at the Pierre Auger Observatory, a project involving eighty institutions including ITeDA and KIT.

The ceremony was followed by a two-day “German-Argentinean astroparticle workshop”, distributed between the Universidad Nacional de La Plata (UNLP 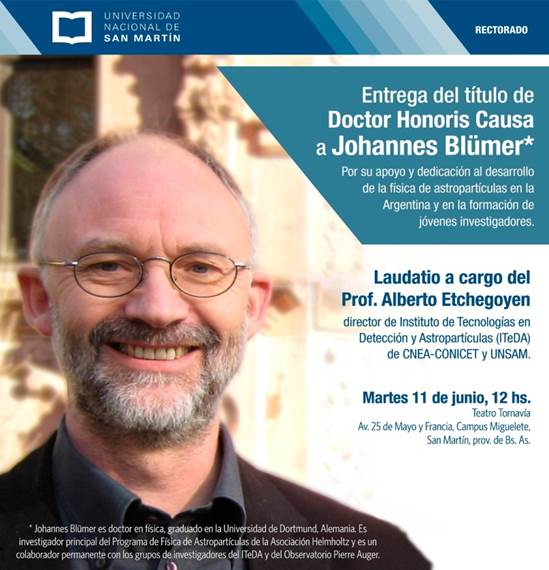 On 1st February 2013, the new Graduate School "Elementary Particle and Astroparticle Physics: Science and Technology (KSETA)" at KIT was officially opened with a grand celebration. This ceremony was attended by more than 200 people. The foundation of the school is based upon the successful application in the framework of the German Excellence Initiative in June 2012.

One of the highlights was the dedication of the Julius Wess Award to Peter Jenni and Michel Della Negra for their outstanding contributions to the physics at the Large Hadron Collider (LHC) at CERN (Geneva, Switzerland). As longterm spokesman of the two large-scale experiments ATLAS and CMS, repectively, both have substantial contributions to their construction and operation. Their work led to the discovery of the W and Z vector bosons in 1984 within previous experiments and now to the discovery of the Higgs boson at the LHC. Both scientists are closely associated with the KIT through the collaboration at the LHC for the past 18 years.

Top photo on the left (from left to right): Dedication of the Julius Wess Award to Peter Jenni and Michel della Negra (2nd and 3rd) with Prof. Blümer (1st) and Vice President Prof. Löhe (last-but-one) and with laudator Prof. Müller (last).

Another highlight was the dedication of the honorary doctorate to the Nobel laureate James W. Cronin. He was honored for his outstanding achievements in the field of cosmic rays. His engagement led to the successful construction and operation of the Pierre Auger Observatory in Argentina, where KIT has a large contribution to the foundation and the operation.

In the morning doctoral students presented the wide range of research topics of KSETA within the KSETA colloquium. The research topics range from the search for Dark Matter to theoretical and experimental particle physics at the CMS detector, through the construction of KATRIN and to the modeling and architectures for data-intensive science.